The Voice of Neurodiversity. The Brilliant Minds of Tomorrow. 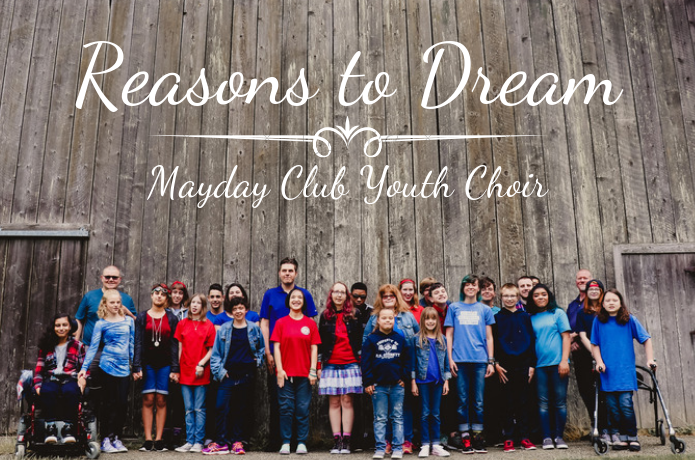 ‘Reasons to Dream’ is the second major album release by the Mayday Club Youth Choir. The choir is made up of forty-two young people from around British Columbia affected by autism and other neurodiversities.

The nine-song album features choral renditions of popular and classic songs by the likes of Lady Gaga, Ozzie Osbourne, and Shakira. The album features the talents of soloists, rappers, beat-boxers, drummers, and pianists, all of whom are affected by various challenges in their daily lives. The songs are all centered around overcoming obstacles, having perseverance in the face of affliction, and rising above limitations.

The Mayday Club Youth Choir from British Columbia, Canada, performs popular and classic songs in a variety of genres, that express their message of ending bullying and promoting equality for people with neurodiversities.

The choir was founded in 2015, and has since opened for such acts as Temple Grandin and The Harlem Globetrotters. Mayday Club has sang live on CKNW News, was featured in a Lynda Steele podcast, was the subject of a documentary by Vancouver-Based production company Cutterpillow Productions, that premiered at New York Mental Health Film Festival. The choir presents lectures at UBC for aspiring professionals, and recently appeared live on Global TV to open the 2019 Variety Club Show of Hearts.

Mayday Club is a registered federal charity based out of Abbotsford BC, that aims to provide valuable skills-building experiences for young people with disabilities. The folk behind Mayday Club believe that by educating both the community and the youth they serve, British Columbia can become stronger, both economically and socially.

The group believes that by educating the public on neurodiversities such as autism, they can eliminate the stigmatization and exclusion of neurodiverse people from schools and workplaces.

Reasons to Dream is sponsored by Vince Renaud and the Bryan AdamsThe Warehouse Studio in Vancouver.

All proceeds will go to support Mayday Club, and their continued endeavors to spread awareness for inclusion throughout BC.